How To Use A Bubbler Pipe

Bubblers are a type of cannabis smoking accessory that combines the smoothness of a bong experience with the convenient usage of a regular pipe. They are a great way to upgrade your smoking experience, as they offer a smoother smoke than other methods while reducing the harshness of dry-herb smoke.

They have a lower water filtration rate than most water pipes, which makes it possible to enjoy a more impressive and robust flavor profile. Bubblers are often used by smokers who prefer a milder and more natural taste of their marijuana flowers.

DISCLAIMER: It’s not a good idea to smoke out of a bubbler if you haven’t done it before, as the hit is much stronger than a joint, and it takes some practice to get it right.

A Brief History and Anatomy of Weed Bubblers

There are several theories explaining the origin of the device, but no one knows for sure. One of them claims that the bong is an ancient, modified form of a hookah. The latter mentioned originated in Asia. “Baung” in Thai is pronounced the same as “bong,” which also refers to a bamboo pipe or water pipe. Besides, Central Asia is where the history of cannabis smoking is deepest.

According to another theory, African countries are the origin of the smoking aggregates. During excavations in Ethiopia, researchers found a tube with vegetable residues inside. In African cultures where the psychoactive effects of “divine flowers” were used in religious practices, smoking devices were positioned on the floor and not moved so that users would not accidentally bump into them. 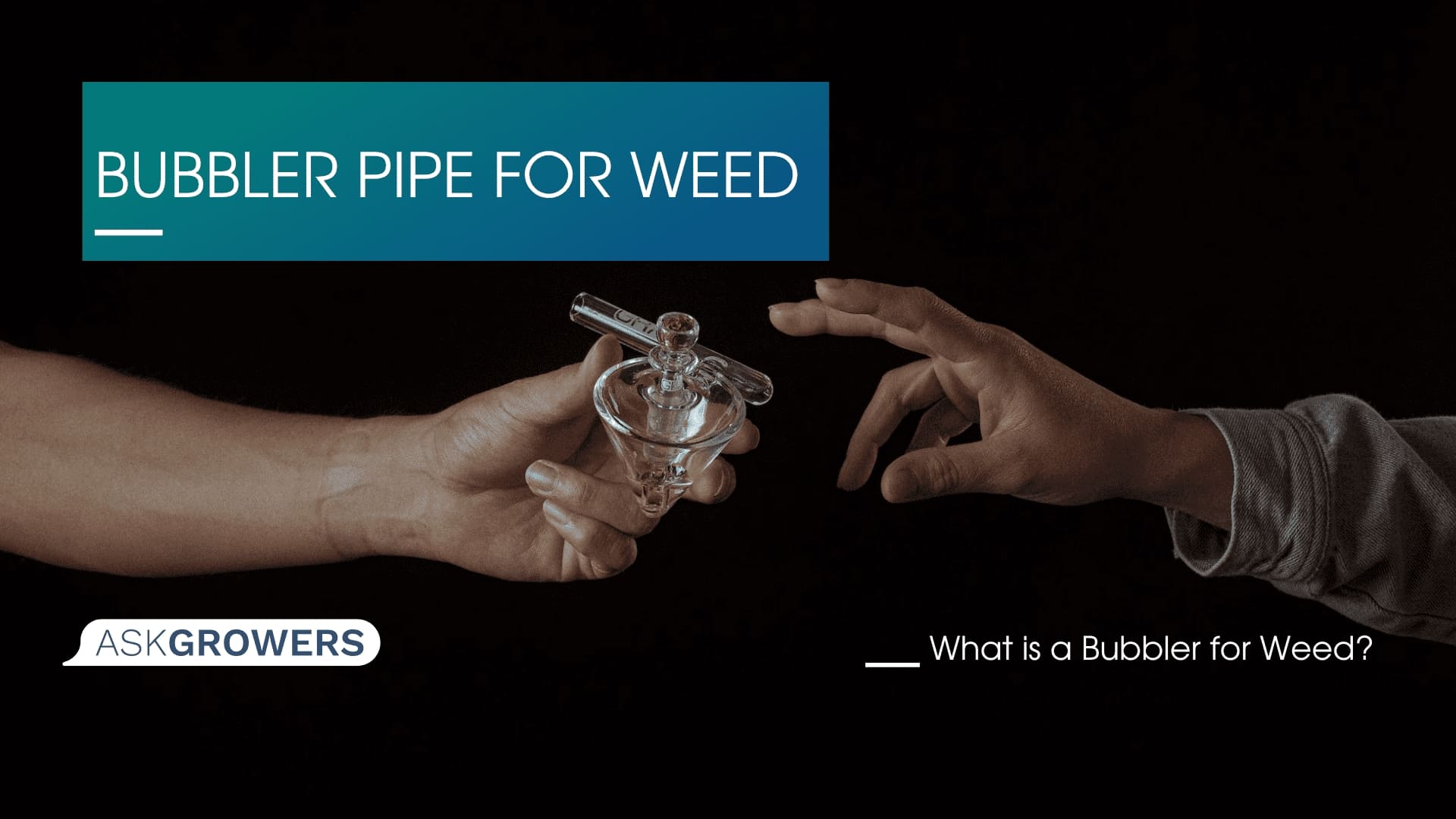 No matter how simple and inexpensive a bubbler may be, it will have at least four parts:

A mouthpiece is a pipe that delivers purified smoke to the lungs.

Bubblers vs. Pipes vs. Bongs: What’s the Difference?

Pipes are handy for smoking dry weed as they do not produce as much smoke as a bubbler or bong. However, a pipe contains less marijuana than either a joint or a blunt when it comes to dry-smoking methods. Pipes are popular among inexperienced smokers because they are so easy to carry around, produce minimal noise, and can be easily disguised as a tobacco pipe. And it’s easy to use one: all you need is the pipe itself, the product you want to consume, and either a lighter or matches.

One of the first noticeable traits of bongs is their different appearance from bubblers. Bongs have a vertical construction and must be kept upright while they are being used. The user can make puffs that are longer than the ones he or she can make while using the bubbler. Because they are so powerful, bongs tend to be more popular among experienced smokers.

Read Also: How to Smoke a Weed Pipe

How Do Bubblers for Weed Work?

Bubbler pipes, or half-sized bongs, are a popular choice for those who like the portability and convenience of a handheld pipe but dislike the harshness of inhaling the smoke through a standard straight pipe stem. If you are wondering, “Do bubblers waste weed?” the good news is that a bubbler pipe actually helps preserve your cannabis for more sessions. The waste in using a bubbler is really just the way people always load full bowls and let it just smolder out or worse yet, keep burning.

Another question that may come to your mind is, “Do bubblers burn weed fast?” The thing is, water-filter smoking devices burn faster when you take bigger hits. This means you have to hold the smoke in longer. It also gives you less time between hits.

The most noteworthy advantages bubbles offer over other types of water dispensers can be clearly seen. They can be summed up as follows: 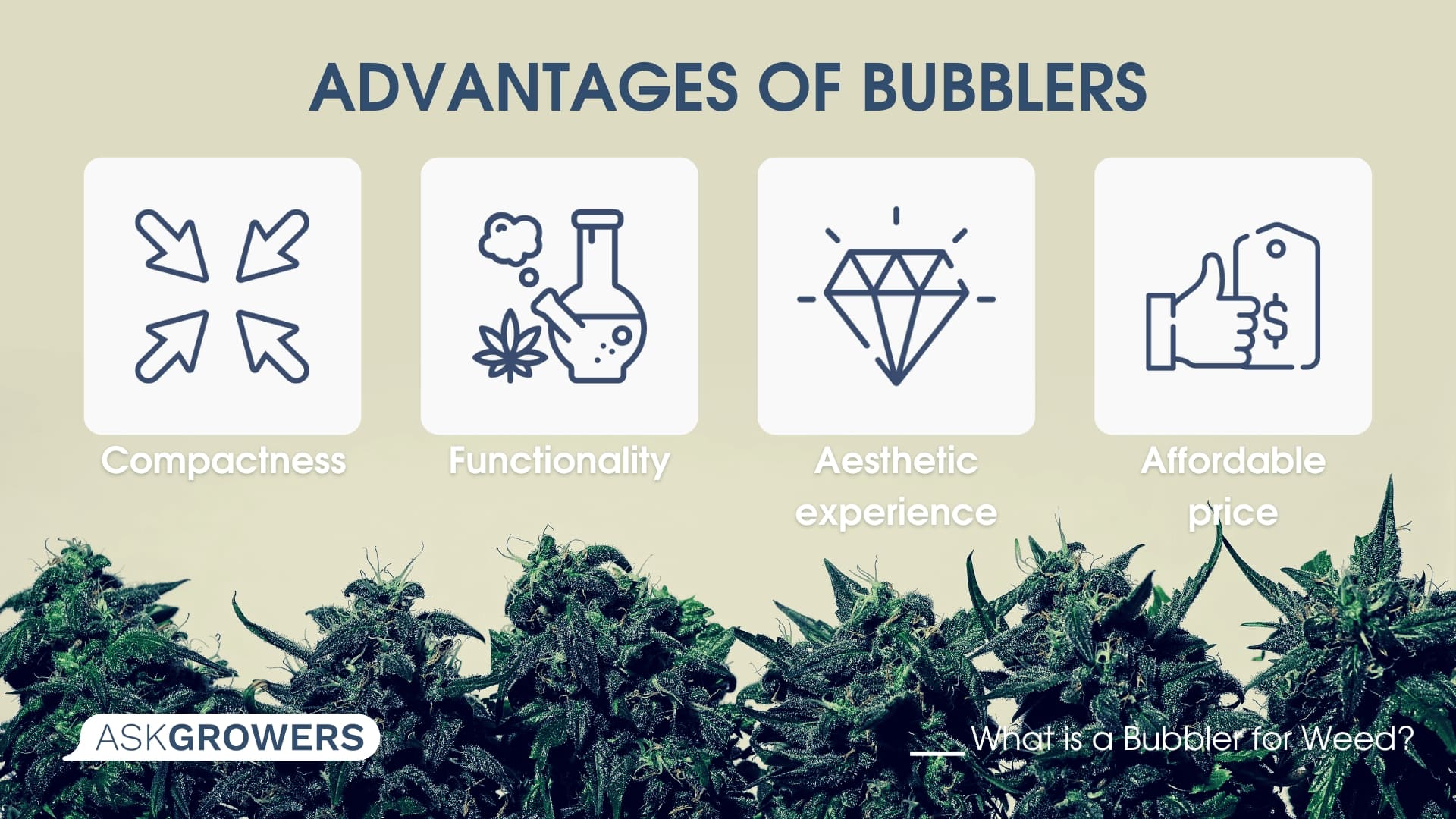 Although there are many positive aspects to the use of bubblers, there are some downsides to them too. Things that could be improved:

What Kinds of Bubblers Out There?

The best material for a bubbler bong is a personal choice, crystalline glass and silicone being two of the most popular options. They are completely safe for use, resistant to heat and fire, and do not release any toxic emissions.

Borosilicate glass is the most popular material for producing not only bubblers but also chemical dishes and other smoking units — it does not react in any way with acids, alkalis, alcohols, odors and doesn’t absorb the smell. It’s also great at absorbing abrasives, and it can be restored to its original state by cleaning and polishing. However, the major drawback of glass devices is that they are easily broken and rarely survive a fall.

A food silicone is also often used in the production of children’s toys and heat-resistant dishes — it exhibits excellent thermoforming properties (one can mold rubber into forms for cupcakes, for example). Thanks to its flexibility, you can wash it easily in hot soapy water or in the dishwasher. But there’s a downside: silicone absorbs the smell well. It should often be washed without the use of most solvents (it may cause stains, cracks; material flexibility will be affected; and, as a result, a new bubbler will have to be ordered).

Step by Step Guide on How to Smoke Weed Bubbler

Smoking a bubbler pipe is easy once you know how to use it. However, there’s a bit of a learning curve when it comes to using them. If you are smoking out of a bubbler for the first time, then make sure to follow these instructions and be careful to avoid the most common mistakes people make when using them. So, how to smoke out of a bubbler? 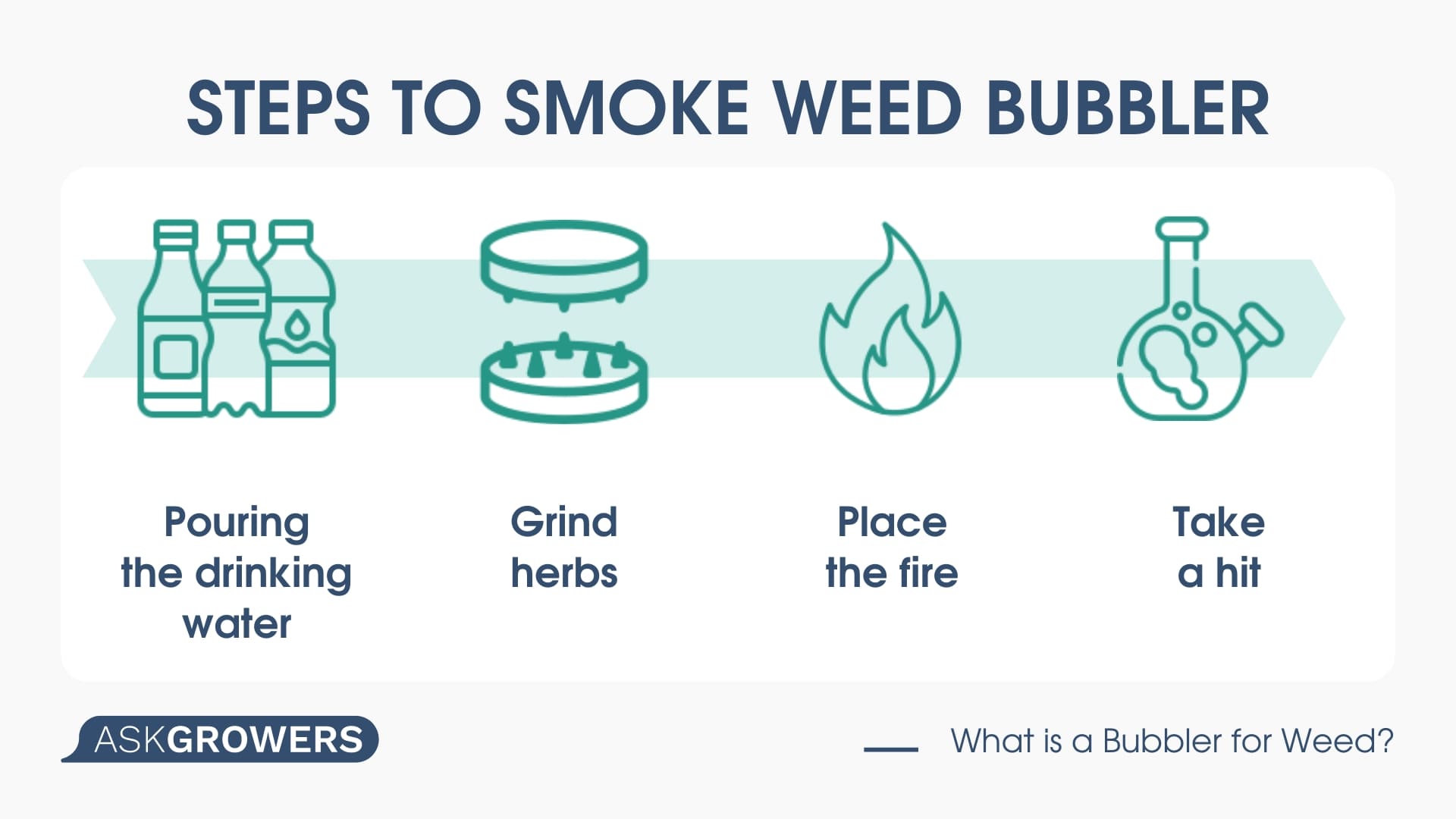 Let’s start with pouring the drinking water. Some people add honey or alcohol to it, or they replace it with juice and milk — these variations change the flavor of the smoke. The amount of liquid you use depends on the size and shape of your bubbler, so just fill it in half and then correct yourself as you go — it should not be over the edges, and there should be no large spray when smoking. It takes a couple of sessions to learn to pour it by eye.

Grind herbs with stems and seeds out of your blend until they form a powder, then place the powder in your bowl.

Use your thumb to cover the carb hole to control the pull.

Slowly place the fire in the bowl and, without releasing the carb hole, fill the water chamber with smoke, inhaling as you do.

After you’ve taken your finger off the hole, the air pressure will force it back. A turbo hole creates a constant flow of fresh air into your bubbler, preventing stale smoke from blocking your path to a heady high. Those who don’t have such a hole in their bubblers just lift the bowl, allowing fresh air to get into the bubbler while they take a hit.

How to Clean My Bubblers: Useful Advice

There are several different methods for cleaning bubblers, depending on the material from which they are made. Glass bubbles can be cleaned in a variety of ways. The following is a step-by-step instruction for the simplest method:

​​To enjoy a bubbler without the risk of being burned, consider the following safety precaution. Take care to keep your bubbler filled with clean water and empty of all traces of impurities, as this will produce a safer and more enjoyable smoking experience.

Are bubblers good for smoking? A simple bubbler pipe is a device that uses water to extend the length of your smoking experience, as well as cool down the smoke coming out of the bowl so that you can enjoy it to the fullest. Bubblers are an affordable and effective way of adding style to any smoking session and can make all the difference between an okay time, and one that makes for a good story for years to come.

This article originally appeared on AskGrowers.com and has been reposted with permission.

How Cannabis Can Be Used As A Tool For Personal Development